Maggie says, “I’m over the moon celebrating 30,000 visitors to my blog! Many thanks to my great supporters and fans, including US Olympian and Coach of Champions, Erica Fraley [Bartolina]! It’s an honor to have my story recognized by awesome role models like Erica. Learn about Erica’s inspiring life story and the impact she’s having on young people here: http://tinyurl.com/pdk8392 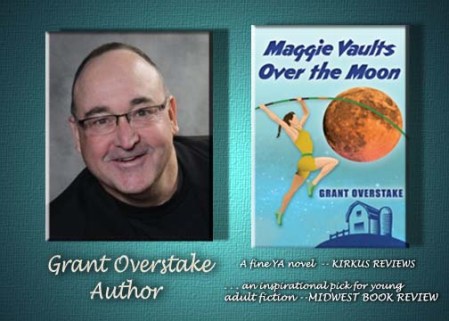 Maggie Vaults Over the Moon author Grant Overstake is this week’s featured guest on Keyhole Conversations, an interview program especially for Kansas-based writers and authors.

The interview by hostess Bonnie Eaton and director/producer Hazel Hart

Just in time for Christmas, Maggie Vaults Over the Moon is featured in the December issue of the nation’s top magazine for pole-vaulters, VAULTER Magazine!

The beautiful six-page spread is titled, Maggie Vaults Over the Moon is a Must Read for Any Athlete, and was expertly written by Michelle Walthall, who did a great job capturing the buzz and excitement that the novel has created in the pole-vaulting community and beyond.

Some of the many images included with the article are the book’s cover, a photo of Olympian Earl Bell and Author Grant Overstake presenting a copy of the book to vaulter Caitlin Hawk, and a huge photo of the entire Tailwind Pole Vaulting Club, located in Jamestown, Kan., which is where the inspiration for the story came from.

Of course, it wouldn’t be proper to reprint the entire article here on this post. Instead, we encourage all of you Maggie fans to help promote the best magazine about the sport of pole-vaulting by going Online and ordering the December issue of VAULTER Magazine. (You can download the December issue onto your computer or mobile device for only $3.00).

We’ve been given permission by Editor Doug Bouma to share what he wrote about Maggie in the intro to this month’s  issue:

Our final issue of 2012 brings an exciting development in the pole vaulting circle. Grant Overstake, Former Miami Herald Sports Writer and a lifelong participant in the sport of track and field, has created his first work of sports fiction, a novel titled Maggie Vaults Over the Moon. This novel is an endearing and inspiring story, and one worth taking a look at for any athlete. Once you read the information and some reviews we collected, you will want to pick up a copy. Maggie is a character you can’t help but fall in love with.

To this we say, Thanks Doug!

And Thank You, VAULTER Magazine!

‘Maggie’ is featured in the December issue of VAULTER Magazine.

“Maggie Vaults Over the Moon shows a touching and realistic perspective of life’s changes wrapped into one heartwarming story. It will captivate those who have lost loved ones and imagine being with them again. This inspiring tale celebrates the courage to turn tragedy and loss into something positive, and how the determination to master a sport can heal. The bits of pole vault history, technique, and struggle will keep the attention of vaulters for sure.” — Doug Bouma, Editor, VAULTER Magazine

"A fine young adult novel about perseverance in sports and in life."
-- KIRKUS REVIEWS

“Girls who play sports and the coaches and families who support them will thoroughly enjoy this warm, uplifting story.”

"That one in a thousand books you'll carry with you forever!"
-- M. Wheatley, 16, Florida

"I've probably read it more than 20 times. I will never get tired of reading it over and over again."

“Captures the true meaning of a high school athlete.”

“The positive influence this book can have on young athletes is invaluable.”

"Heartwarming and realistic, this book is a winner.”

“Captured me cover to cover. I highly recommend it!"

"Instantly transported me back to my childhood. Will translate to anyone who allows themselves to be young at heart."

"A great story of perseverance, grit, faith, and bouncing back after hardships."

“Marvelous! Could see this book being popular with masters athletes as well.”

"Even non-athletes will find this book captivating. It will touch your heart!"

"I enthusiastically recommend it!"

“Every single person should be able to relate to Maggie."

"This is a wonderful book!"

"A well-written tale of epic courage."

“Maggie’s inspirational story will make any girl feel like they can accomplish their dreams."

"One of the most pure and wholesome young adult books I’ve ever read, appropriate for 4th grade and up. When do you ever find a book like that?”

“A beautiful story of triumph through adversity.”

"A story that I think readers of all ages will appreciate."

"Celebrates the courage to turn tragedy and loss into something positive, and how the determination to master a sport can heal."

"I highly recommend it for all teens, especially those seeking direction during the storm and stress of adolescence."

"Getting to know Maggie Steele, her family, and the whole warm and caring community of Grain Valley was a pure delight."

"Maggie is a real trooper!"

“I loved the book and wish I had written it. That’s about as high a compliment as I can make.”

"A magical story written through the eyes of a teen. Cheers, Grant Overstake, for bringing Maggie to life!"

"A great family book, promoting the sport we love!"

“Overstake gets everything right about Kansas. It's sweet to read about a land I knew so well.”
-- Diane Wahto, Poet

Maggie is Too Cool for School

Maggie Vaults at Raise the Bar

Maggie Vaults on a Gill Skypole